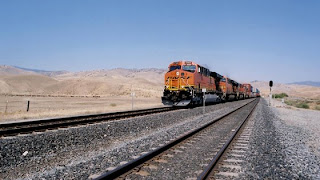 There is a world of metaphor that can be exhumed from an idea that is simple and elegant; reading the project description yields many of them. A film composed of 43 shots of trains, each beginning as the train is just about to enter in the frame, and ending a few seconds after it leaves the frame. And that really is all there is to it, save for some questionable audio choices. So, looking at that description, one gets the film’s sense of history, both in terms of early American trade, and film history with the Lumiere brothers. Then the film’s structure, with shots whose lengths cannot possibly be determined by Benning after he has decided on his rules. After Benning sets up the camera and begins to wait, the train, its conductor, and America’s demand for material and construction become the factors that decide the cuts. And the cars of the train, which visually mimic the progressing images of celluloid, following each other up, one-by-one in a stampede through time. And just as much as I thought I knew what I would see going into 13 Lakes, and did, there is still something impossible about these films’ brilliance that simply cannot be glimpsed in ‘plot’-alluded foresight.

There is a battle that takes place in the film between the landscapes and the trains. This isn’t a man vs. nature dichotomy, though, because the landscapes still include manufactured structures like bridges, homes, factories, and windmills. It is, instead, a competition between that which is still and that which is in motion. Benning’s extraordinary gift for composition of these landscapes makes the train into a kind of malevolent force, a timer that not only cuts that beautiful image that we’ve only briefly been allowed to swoon over right in two, but also tells us just how long we can look at it. I cannot recount how many times I internally pleaded with the conductors to slow down their trains, to please let me have these images just a little bit longer. And like the glimpse of an entire lifetime that might flash before one’s eyes before dying, so is the last, complete view of the landscape, post-train, that lingers for just a bit before the harsh cut to black. If I’m sounding excessively schmaltzy about all of this, it is only because it is all so moving that anything less would feel inadequate.

This is part of what makes the 43rd train so mindblowing. Running through what could inarguably be the film’s most beautiful image, the train grinds to a halt, with one car missing, creating a window in the perfect spot to see through to the windmills that stretch back to the mountains. The train is stubborn, and will not budge, much to the pleasure of anyone looking. The motion of the windmills no longer has to compete with the train, which has now joined in with the landscape rather than barging through it like so many times before. 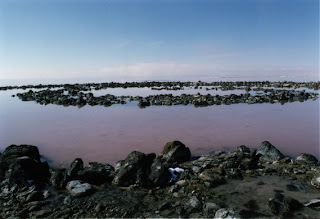 The framing decisions in the film have the least substance of any of Benning’s films I’ve seen, since the shot selections, lengths, and quantities are arbitrary and inconsistent. The film instead, as I only detected after the film, is an interesting example of truth, documentation, and the cyclical patterns of nature. In a way, Smithson’s Spiral Jetty could be the quintessential James Benning landscape. Completely organic and natural in its materials and archetypal form, the intrusion of man is subtly, instinctively awkward in its surroundings, which collaborates with its scale to produce a moving and mammoth sense of awe.

Structurally, the film is like a log (an account, not a stump). A date shows up on the screen, followed by 5-7 shots of the jetty and surrounding landscape that each last about two minutes. The first date of April 20, 1970 is when the jetty was completed. The next segment is in the following September, then in December, and so forth for the first three years, documenting the physical and chemical changes of the lake and its interaction with this bit of land. As time progresses, the log becomes more and more spread out, beginning to jump years at a time. There are only two segments in the 1980s, and both of them could be outtakes from 13 Lakes; the jetty was, at this point, completely under water (12 feet under in 1988). In the 90s it begins to resurface, and in the 2000s it seems to be back to where it was when the film began. Like a parabola, the film begins to scrunch up again at the end, ending with three or four segments in 2005, 2006, and 2007.

What I initially thought was a well-kept and relatively consistent documentation of an important piece of art turned out to be only a recreated estimation of time and nature. The entire film was shot in about an 18-month period from 2005-2007, and merely matches up annual water levels and tide shifts with historically accurate dates and statistics, the equivalent to Brad Pitt performing his entire lifetime for a film, The Curious Case of Benjamin Button, that was in the production for less than two years, minus the CGI.

Over the course of this film, Spiral Jetty became more and more of a natural creation, seemingly just as belonging as any of the near by mountains. To see it submerged made the locale feel hollow, and calls attention to climate change, and what defines a landscape. Often, Benning’s framing will mask the lake to where the asphalt and rocks are unrecognizable as the Spiral Jetty, which made the film feel even more like a pure study on climate and environmental shifts and balance. 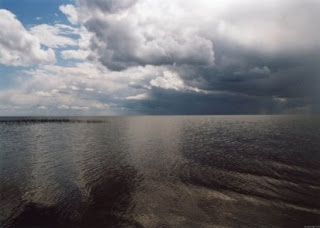 13 Lakes (2004)
Update on 4/30/2009:
Not much to add here, other than obvious tweaks, like the film looks much better projected from 16mm in a theatre than a TV rip on a computer. The grain and dust is even more of a factor here, becoming like the birds and cars that intrude on the perfect half-and-half compositions.

Originally posted on 3/17/2009 @ 11:51pm after viewing a bootleg of the film:
The initial prospect of sitting down to watch this film, or any James Benning film, or any structural film for that matter, can almost be comically rebarbative. The film is exactly what one would imagine from its ‘premise’: thirteen uncut ten minute shots of thirteen different lakes from around the United States. While what you see over the 2 hours 15 minute running time is predictable based on this description, its effects on the viewer are very much not. In the first glimpse of each lake, acknowledging that the next ten minutes will be devoted to staring at this near-photograph, I searched for idiosyncrasies of the image, for some reason, starting with the more detailed very bottom of the frame, the part of the lake that is closest to the camera, then skipping immediately to the sky, and finally the ‘top’ of the lake. In the drawn out blackness that separates each shot of a lake, the anticipation is more than noticeable. ‘What will aesthetically separate the next lake from the others?’ ‘Will it have enough substance (wind, rain, manmade motion, rolling clouds, dynamic sound) to sustain my interest for 10 minutes?’ In some cases, like the show-stopping, heart-dropping 9th lake, the answer to the latter concern is a resounding ‘Yes!’ And others, I greeted the first few frames with, basically, disappointment, before I settled into it, zoned out, or it developed into something more complex than I’d first expected.

To stare at lake after lake for ten minutes at a time is to, at one point, wonder why the prospect is such a turn-off. A common complaint I’ve read about Benning’s 21st century output is that it is not cinema, but that it would go great in a museum. One can love a photograph and stare at it for ten, twenty minutes and enjoy every second of this experience, yet ten minutes of time spent with a deceivingly simple but ultimately lovely composition of a lake (in motion, no less!) is like an insult. ‘How dare someone else dictate how long I look at something!? If I look at this photo or painting for an hour it’s my decision!’ Is there narcissism in the formal layout of 13 Lakes? Should Benning be so in love with his photographic skills that I should applaud him for forcing me to spend the time with them that he believes they deserve? Yes, and yes.
But as much as this film glorifies the incorruptible beauty of nature, and the power that motion has on a viewer’s consciousness, it is a sonnet (or almost one, damn the absence of a 14th lake) to the structure of film, particularly 16mm. Dust has never been more playfully intrusive, as every speck is somehow magnified by the still lakes that occupy their background. And the length of 10 minutes, seemingly arbitrary but specific to the length of a standard, 400-foot 16mm film reel, takes the end of a take out of the hands of Benning and into those of fate and nature. Benning succumbs his role as editor to the medium itself; a moving act of trust toward an increasingly obsolete medium. In 13 Lakes, Benning takes the medium back to one of its first uses, pure documentation. 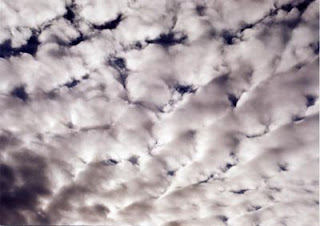 Formally identical to 13 Lakes, Ten Skies has the added bonus of being originally conceived as an anti-war film, inviting all kinds of metaphors and meaning. I tried to ignore this, though, and the main question on my mind during this film was the definition of ‘sky.’ According to Dictionary.com, the word is defined “the region of the clouds or the upper air; the upper atmosphere of the earth,” but I think this is silly. Why should clouds define the sky if the sky still exists without them. There is no mention of stars, either. And if clouds can be low enough to roll through hills and still be in the sky, then it should just be ‘the space above the earth.’ If the camera is placed on the ground pointing straight up, and a person is standing at the base of the camera, stretching up into the blue, then I think he is part of the sky. And so are the birds and the airplanes and the smoke and the sun and the moon. Benning claims that he wanted to make Ten Skies after making 13 Lakes because he was frustrated that the sky was only half of the frame, and he wanted a film with the sky as the central subject. As if the lakes weren’t also shafted out of the other half of the frame hogged by the sky (which, in my book, got two films), Benning never felt the need to make a film where the water took up the whole frame and didn’t have to share with the skies?

Where looking out at the Lakes felt like a study of composition and rhythm, Skies yields an interest in subtle movements and a search for something. To look up, craning one’s neck, is to exert energy for a purpose or a goal. Watching 13 Lakes could be mistaken for looking through a window cut out in the cinema wall, but with Skies, gravity tells us that these images must be reproduced; we know that we are not looking up and feeling the pressure that that entails. This is a spiritual allegory.